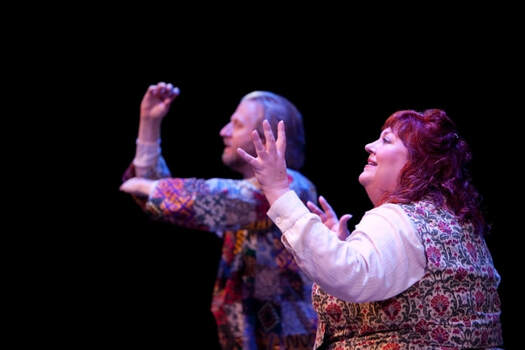 composer's note: ACROSS A DISTANCE unites Deaf performance and opera through an allegorical tale about Man, a storyteller, and Woman, a scientist, who live on separate islands, longing to connect. Through the assistance of their magical companions, a flock of birds who communicate through song and a pair of trees who communicate through movement, Man and Woman are able to meet. Though Man speaks American Sign Language and Woman speaks and sings in English, the two are magically able to understand one another. But once they break the rules their companions set for them, Man and Woman find their ability to communicate is lost. 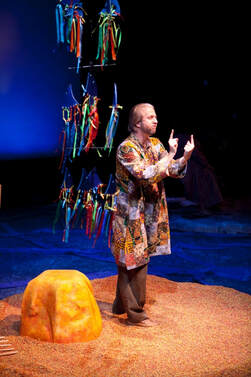 At the heart of ACROSS A DISTANCE is a series of probing questions: What is the nature of communication, and what are its limits? What happens when the magical first blush of love gives way to the challenges of uniting two disparate lives and realities? What are the possibilities and limitations of attraction? What is the relationship between knowledge and intuition? How can Deaf performance and opera interact with each other artistically?

​This unusual project began as a friendship between Julia Faulkner (a professional opera singer and voice teacher) and Robert Schleifer (a Deaf professional actor) that began a series of dialogs on the nature of music, art, and their respective modes of artistic expression. Out of these dialogs came the seed of this project: how can these two seemingly mutually inaccessible worlds interact with each other artistically? What can we all learn by exploring this notion theatrically? What can we teach others about what we have learned? 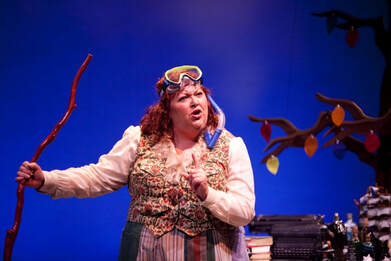 Fragments of ACROSS A DISTANCE were first performed as part of the New Play Development Workshop by the Chicago-based Infusion Theatre Company in September of 2009.  The complete work was premiered by Faulkner, Schleifer, and the Sole Nero Duo (Anthony Di Sanza and Jessica Johnson) at the University of Wisconsin-Madison Theatre as part of their season in 2010. It received its second performance in 2011 at Emory & Henry College.