performed by the University of Wisconsin-Madison Madrigal Singers, dir. Bruce Gladstone:
composer’s note: “Ave Verum Corpus, After Byrd” began as something like a dare, issued to me by my friend (and amazing choral conductor) Bruce Gladstone. He said something to me along the lines of: “you know what would be really interesting and fun to perform? Something like a ‘remix’ of a classical choral work, whatever that might mean to you. Just sayin’.” And so, this piece was born of that dare. I chose William Byrd’s stunning “Ave Verum Corpus” as a jumping-off point, added a second choir, and used that expanded color palette to find ways of expanding Byrd’s work into something that both honors that work’s intentions but also brings it into my own musical sensibilities.

This “remix” employs a huge number of different strategies and techniques for re-interpreting Byrd’s classic. Sometimes the two choirs sing the same music, but out of sync with each other, creating a rich overlap of sound. Sometimes one choir acts as “orchestra” while the other sings more like a traditional choir. Sometimes I use the Latin text as a place to find expression, intensifying the pain and despair on “miserere,” and letting warm sounds blossom on “dulcis,” for example. Sometimes the vocal lines burst into florid ornamentation in a more chromatic version of late Renaissance style. Sometimes I strip the texture way back into simple solo lines by individual choir members. Sometimes I go “out of order,” re-arranging the piece to put relationships that were formerly separated by time right up against each other. Some parts of the music get repeated multiple times, with variations, as something like a mantra: specifically “O dulcis, O pie” comes back over and over as a sort of “home base."

​And, overall, more than anything else, this piece turns Byrd’s small masterwork into something bigger, something with a theatrical shape that exploits the inherent drama in “Ave Verum Corpus” and turns that drama into a larger structure, almost a “concerto for choir and choir” (instead of choir and orchestra). By “remixing” Byrd’s piece, my version of it becomes something thornier, more romantic, and more dramatically charged, and very different. 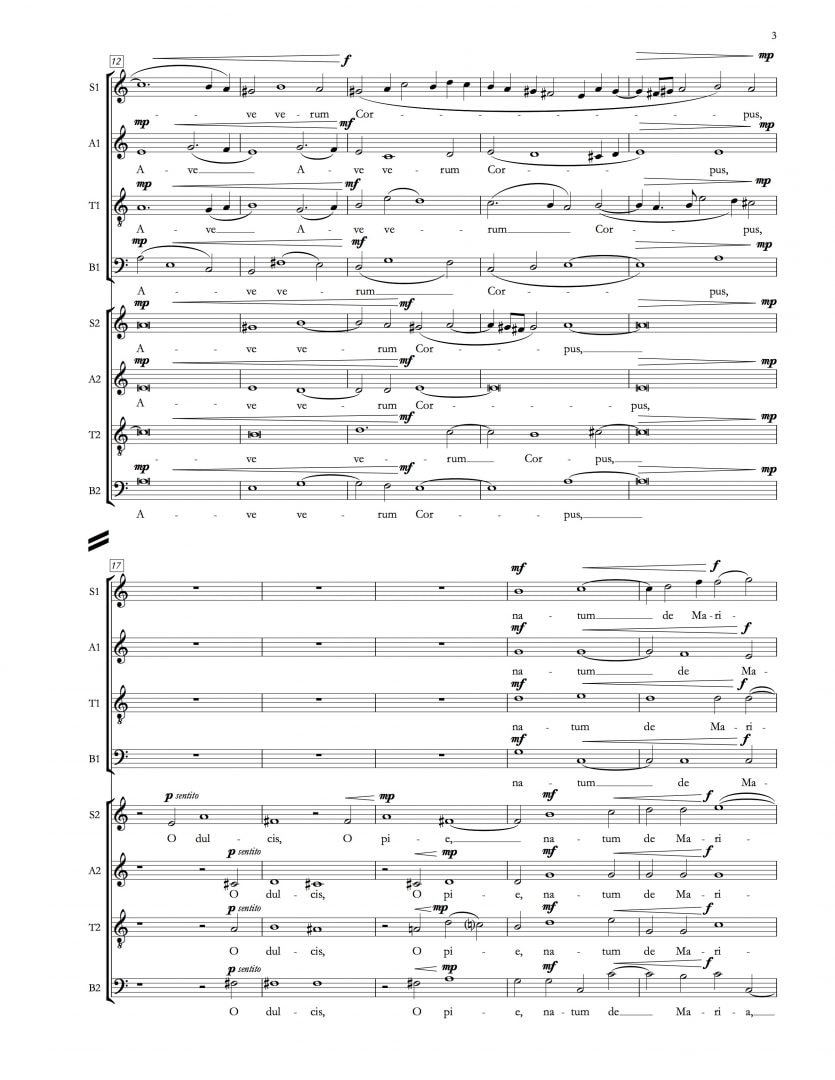