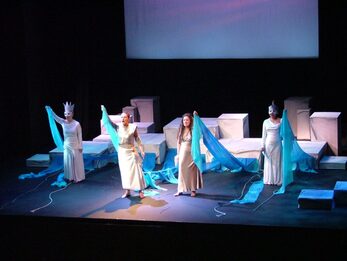 ​composer’s note:​ “Iphigenia at Aulis” is based on the play by Kenneth Rexroth, which takes the classic Greek myth of Iphigenia, the young girl who is sacrificed to the gods so that the wind can start again and the Trojan War can be fought, and turns that story on its head. In Rexroth’s version, Iphigenia is not an innocent victim, but thinks of herself as already a god, and orchestrates her own sacrifice so she can enter the heavens (and the history books), amid the protesting and resistance of all around her. This Iphigenia channels the power of godliness and uses it to launch the ships towards war and launch herself towards immortality. 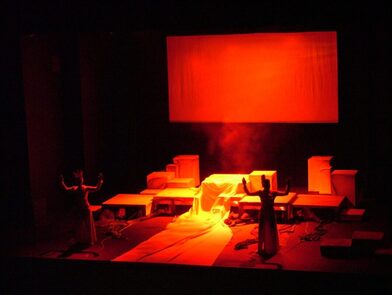 My operatic version of this story casts Iphigenia as a larger-than-life dramatic soprano role, who nevertheless hangs on to some of her youthful girlishness. Her lover, Achilles, is a pants role, sung by a mezzo-soprano, which allows their voices to intertwine and become entangled in interesting ways that illuminate their relationship. There are two choruses: the main “chorus I” is really a lead role. Played by two women, a soprano and mezzo-soprano, this chorus acts as a kind of impartial narrator, but also as shadows of Iphigenia and Achilles, singing along with them as things become particularly intense, and becoming drawn into the plot of the opera as Iphigenia approaches her sacrifice. The other chorus (chorus II) is made up of four men who sing lustily and with abandon, a very earthy counterpart to the elevated tones of the four high voices. And King Agamemnon is represented by a powerful baritone. 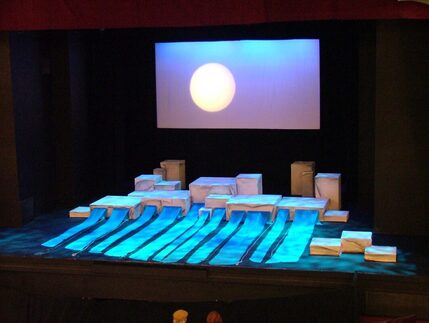 As the opera moves towards its inevitable end, and as Iphigenia bowls over all in her path, the male voices and male characters drop out of the story, until by the end of the opera there is only Iphigenia and her two “chorus” singers, their voices reaching up towards immortality.

​(production photos from the premiere in Madison, Wisconsin in 2005. Directed by Kelly Bremner. Costumes by Shelley Cornia. Lighting by Daniel Gallagher. Sets by Kristin Hunt.)