for mixed-age boychoirs, piano, violin, and drum; 6' (2014)
(commissioned by the Madison Youth Choirs)

performed by the Madison Youth Choirs, dir. Randal Swiggum:
composer’s note: When Randy Swiggum cam to me with the idea for this piece, I thought it was both a little crazy and a little genius. The boys of the Madison Youth Choirs were going to be a featured performer at the Aberdeen International Youth Festival in Scotland, and Randy wanted me to set one of the thorniest, darkest texts in all of Shakespeare for boys to sing, with instrumental accompaniment, featuring stage movement. It’s the kind of idea that makes people go “what?!” when they first hear about it, and then makes them grin in appreciation when they experience it.

There’s something about boys’ voices taking on such a difficult text that makes it all the more moving, these young singers investing all they have to portray those dark words about death. In my setting, the incredible dramatic intensity of this soliloquy comes to the forefront. The first line “tomorrow and tomorrow and tomorrow” becomes a kind of downtrodden mantra, pulsing beneath the song, occasionally fragmenting into strange aleatoric textures that sound something like murmuring under one’s breath. Lines that might be delivered as an outburst in spoken language become huge crescendos that almost collapse under their own weight. The “sound and fury” in Shakespeare’s text is an explosion of high & intense singing, drums, pulsating piano, violin tremolo, and a general sense of dread.

Through this all, the tonality of this piece keeps coming back to the note D-natural. No matter how much the music rages and thrashes, the D-natural holds on, making the whole enterprise feel stuck, futile. As the last moments of the piece approach and the choir dissolves into texture and sound, the choir also slowly turns away from the audience, leaving the listener alone with the final devastating words: “signifying nothing.” 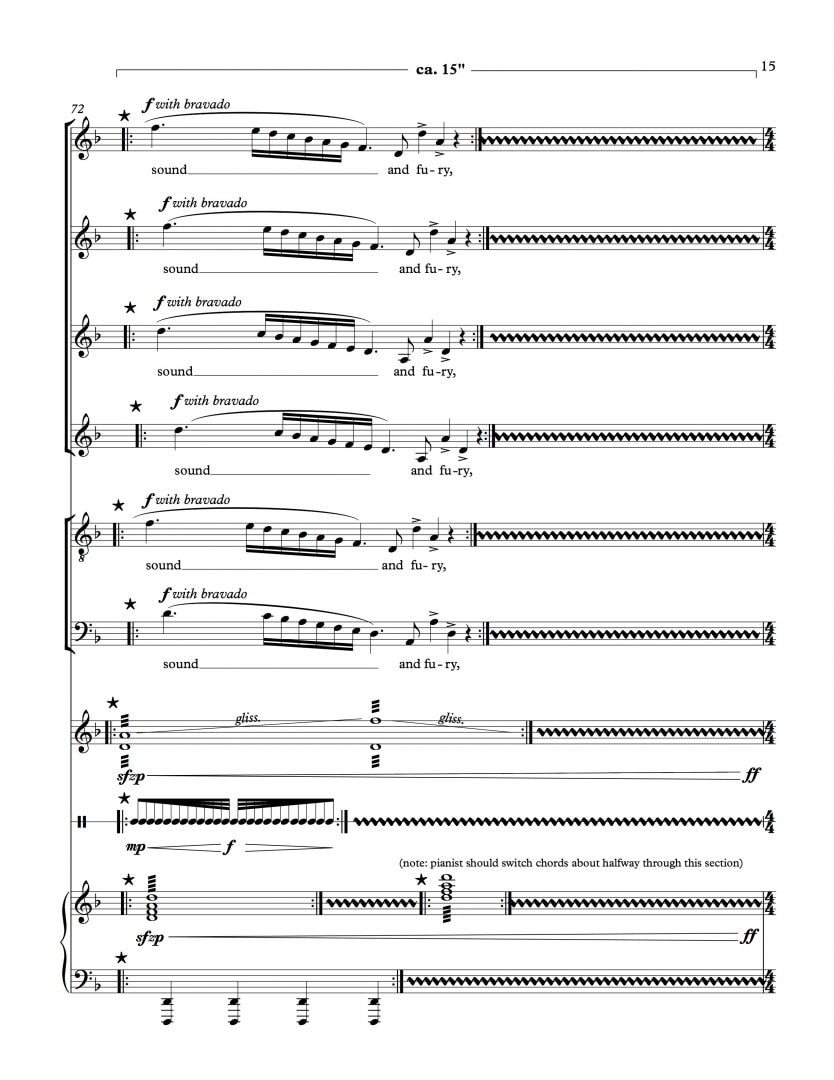