That Which Is Near (text: H. Th. Wijdeveld)

performed by the Taliesin Community Chorus and friends, dir. Effi Casey:
​composer's note: When I first heard about this opportunity to write a musical work in honor of Frank Lloyd Wright’s 150th birthday, I had a lot of grandiose ideas about big architectural music, music that would be huge in sound and concept. But when Taliesin Director of Music Effi Casey took me on a tour of the house and the grounds, what struck me more than anything else was the beautiful intimacy of the spaces, the way in which every room was designed to draw you in closer.  And then when I learned of the Taliesin Community Chorus and their love of singing together to create community, I knew “That Which Is Near” was going to take a different direction than I’d originally thought, and really become a piece about intimacy and connections between people.

H. Th. Wijdeveld’s book dedication entitled “Some Flowers For Frank Lloyd Wright” felt like the perfect text to use for such a piece. It’s stunning in its descriptions of Wright’s work, but also has a charming sweetness about it, the way he’s just offering “some flowers” rather than a huge extravagant gift. And so “That Which Is Near” is two things at once: First, it’s a celebration of Frank Lloyd Wright’s incredibly masterful work as an architect & thinker, and how wonderfully persistent and evergreen that work still is, 150 years after his birth. But second, it’s a celebration of the community at Taliesin, and the ways in which this place that Frank Lloyd Wright created brings people together and fosters human connection. 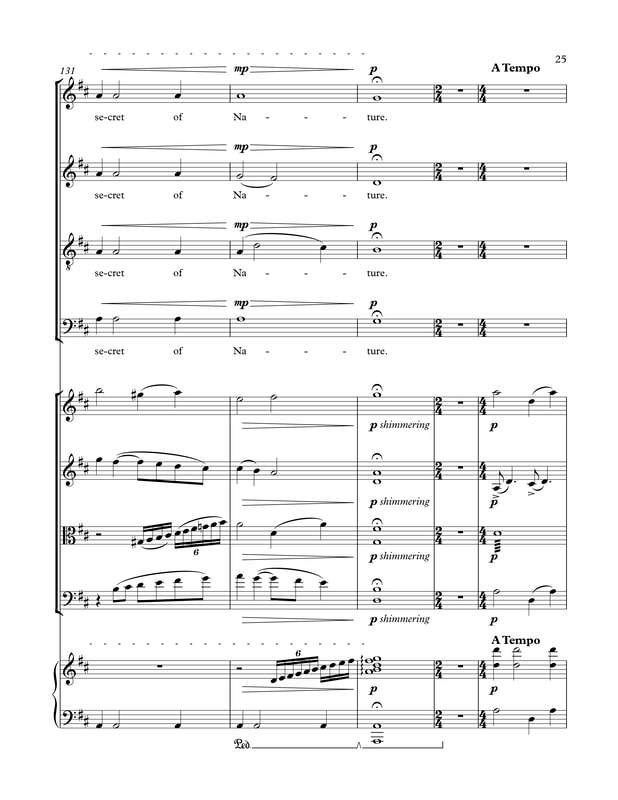