commissioned by Daniel Shirley for East Carolina University
​
​composer's note: When the wonderful tenor Daniel Shirley approached me about setting one of A.E. Housman's poems from "A Shropshire Lad," I was excited mostly because Dan is a fantastic performer. But reading Housman's classic poems for the first time in a long while in preparation for this work, I was reminded of these poems utter beauty, and also of how plainly emotional they are in contrast to some of the fussily poetic works written by Housman's contemporaries. Because of how this directness of language struck me, I set "The Long Road" as something recalling folk song, a melody that feels like it was remembered from long ago rather than invented new... but expanded also into a dramatic shape, an operatically-inclined scene for voice and piano that paints the exhaustion, loneliness, and endless journey of Housman's brilliant poem.

Still hangs the hedge without a gust,
Still, still the shadows stay:
My feet upon the moonlit dust
Pursue the ceaseless way.

The world is round, so travellers tell,
And straight though reach the track,
Trudge on, trudge on, ’twill all be well,
The way will guide one back.

But ere the circle homeward hies
Far, far must it remove:
White in the moon the long road lies
That leads me from my love. 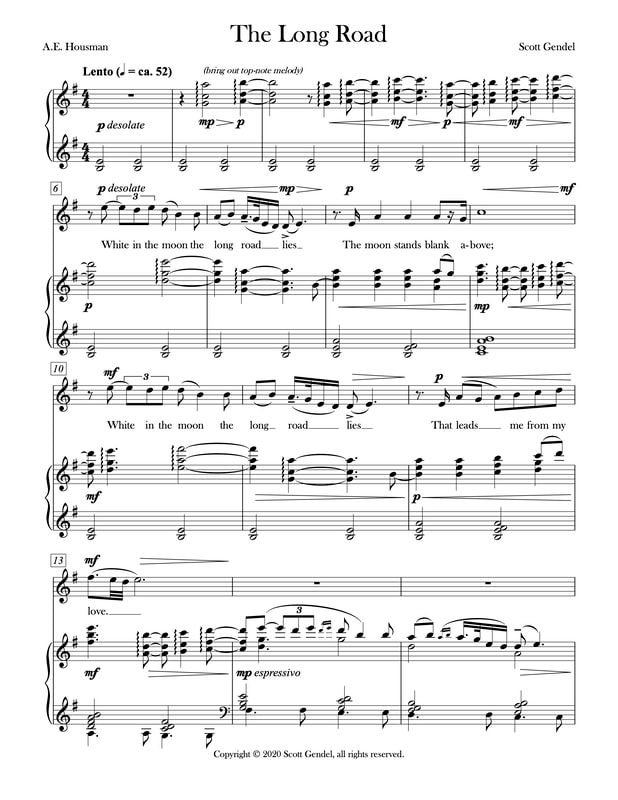