a Madrigal Comedy for all ages, for 5-part mixed choir or 5 solo voices; 45' (2007)
book and lyrics: Timothy Knapman
(commissioned by the University of Wisconsin-Madison choral department)

performed by the University of Wisconsin-Madison Madrigal Singers, dir. Bruce Gladstone:
(interstitial narrations not included)
composer’s note:  The Renaissance “Madrigal Comedy” is a fantastic dramatic form, whose absence from the modern-day choral world I mourn greatly. That form involves telling a story through a string of dramatic choral scenes, separated by an introductory poem read aloud. Instead of each singer representing a character, as in opera, the entire choir embodies each character as that character comes up. In addition to this fascinating construct where the choir gets to be every character, the Madrigal Comedy tradition was about incorporating lots of different popular styles of the time into one work, combining many different types of choral music in one big hybrid piece of music-drama.

“The Night Knight” is my updated version of that genre. The story and lyrics, by the brilliant and witty children’s book author Tim Knapman, are suitable for children but enjoyable by those of all ages, full of vivid characters, delightful wordplay, and a wonderful sense of drama. My music for this piece is stuffed with everything but the kitchen sink, in the spirit of Madrigal Comedy, but taken to the extreme. The choir plays kazoos, stomps rhythmically on the floor, sings on “bok bok” chicken noises, slides and squeaks all over the place, and much more. There’s a vocal jazz song, a samba-inspired number with sound effects, a creepy chorus of bedbugs, a Brahms-inspired lullaby, and so on and so forth. All these disparate styles are united in service of telling a great story, making the audience laugh, and teaching a lesson about fighting one’s fears. It’s one of the works of which I’m most proud, and a real tour-de-force for any choir (or group of 5 singers, in Renaissance style) who would take it on. 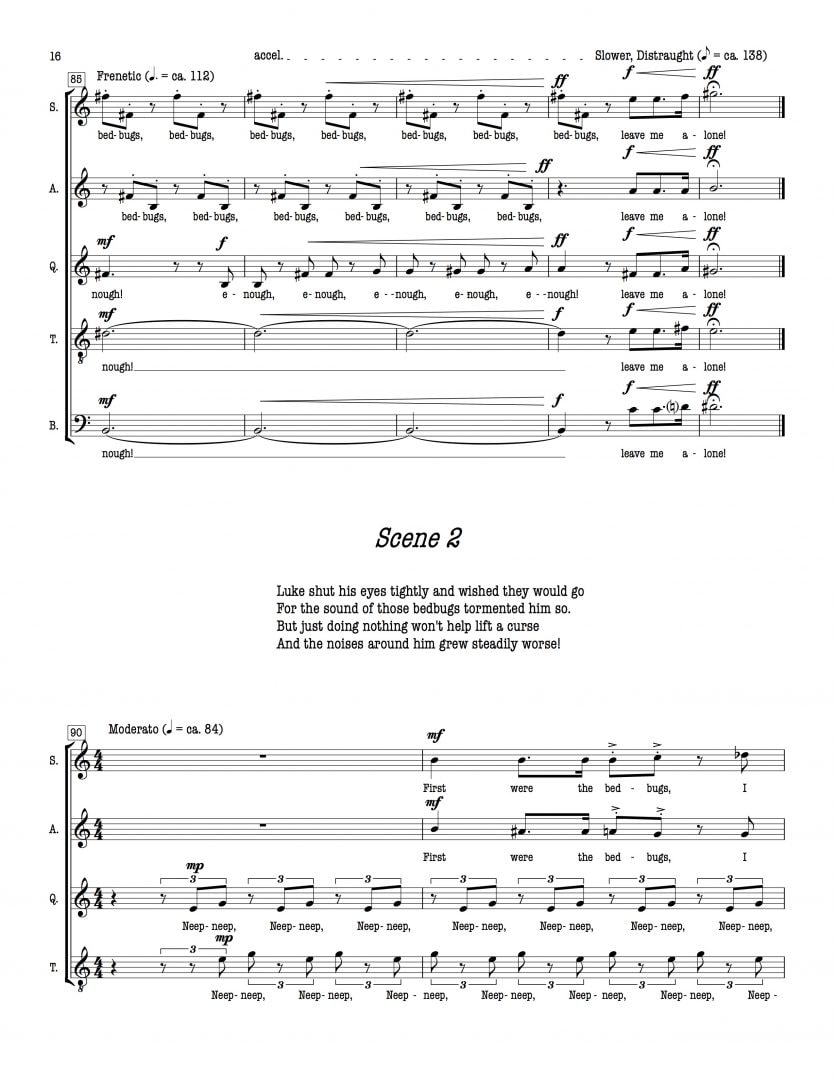