performed by Khorikos:
text:
“The road of excess leads to the palace of wisdom.”

composer’s note: “The Road of Excess” was written for a concert featuring choral music that's "about" rhythm. And while that meant much of the music was very rhythmically active and driving, I wanted to take that prompt in a different direction. And so “The Road of Excess” is a choral piece modeled, in part, after Steve Reich’s “phase” works:

A 9-bar phrase is presented in its pure form as kind of prelude to the piece. Then, 4 of the choral sections sing that phrase repeatedly, but in slightly altered rhythms: the original 9-bar version, an 8.5-bar version, an 8-bar version, and a 7.5-bar version. As they continue to repeat the phrase, they become increasingly out-of-sync with each other, creating a rich tapestry of choral sound. Meanwhile, as that sonic tapestry is woven, the other two sections not participating in that phasing texture add a stretched-out melody in whole notes, radically changing the harmonic context of the overall texture through those whole notes. By repeating the same single line of text over and over in this complex texture, the music portrays “the road of excess,” but also shows how just repeating that single line can create something much more meaningful (i.e. "wisdom").

But because this piece is about excess, it doesn’t end there. As the phasing vocal lines line back up with each other, they start adding thick romantic harmonies, enhancing the texture harmonically as the music progresses. And when all the phasing parts have lined up together, the entire choir unites in a gigantic crescendo, leading to an over-the-top climactic statement of the text. And THEN, once again (all in the name of excess!), the final cadence of that climactic statement stretches out into ONE MORE long resolution, the initial melody repeated two more times by the tenors, while the rest of the choir slowly winds down to a final chord, milking the material for all it’s worth.

So in the end, "The Road of Excess" is about one single melodic line, which slowly becomes a gigantic minimalist texture, morphs into a huge operatic climax, and finally drifts off into the distance, to the palace of wisdom. 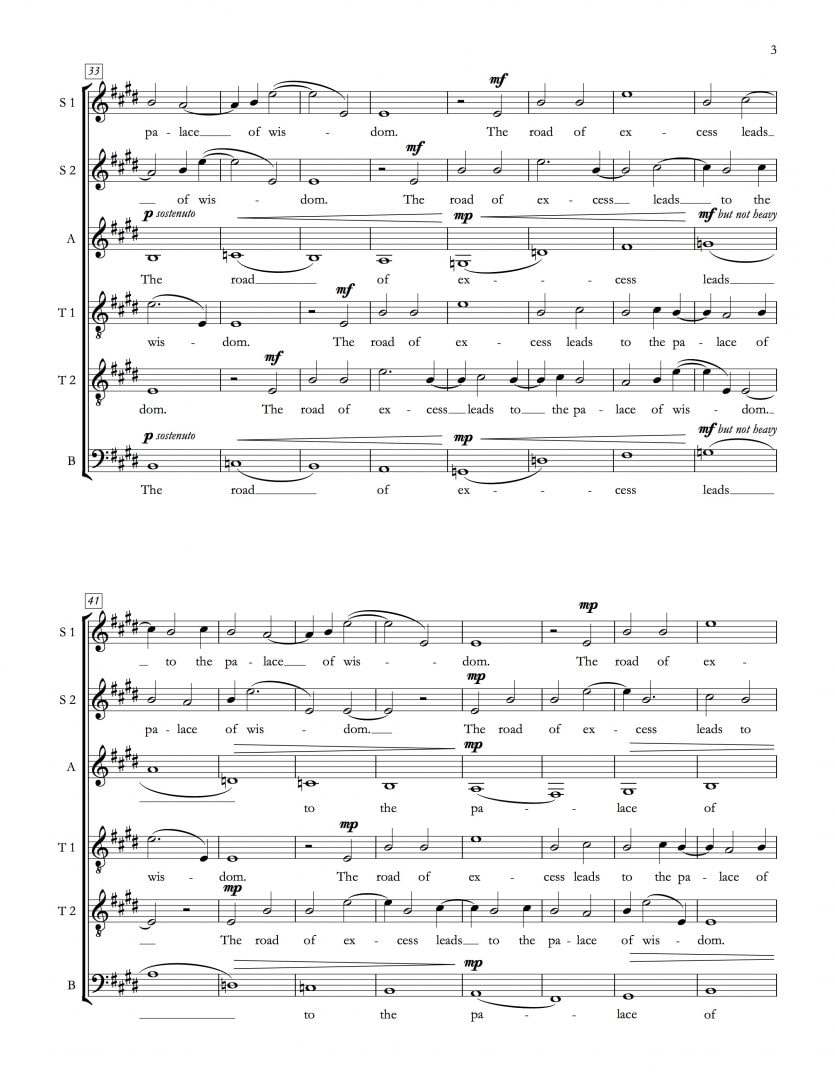