composer's note: Robert Herrick, 17th Century English cleric and lyric poet, was also rather fond of bawdy rhymes and naughty poems.  My friend, the choral conductor Bruce Gladstone, sent me this particular poem of his as a dare: You should set this for men's choir, so I can make the men sing about their frustrated erections!  Or something like that.

In any case, I jumped at the chance, because I cannot resist a good dare, and also because it just sounded like too much fun.  I set Herrick's verse using a lot of augmented chords, a lot of big crescendos that don't quite go as far as they'd like, and other musical tricks to heighten the... SUGGESTIVE nature of this poem.  It was indeed a LOT of fun to write, and to see the audience's face as the choir sings this particular piece of music is priceless.

text:
I dreamed this mortal part of mine
Was metamorphosed to a vine,
Which crawling one and every way
Enthralled my dainty Lucia.

Methought her long small legs and thighs
I with my tendrils did surprise;
Her belly, buttocks, and her waist
By my soft nervelets were embraced.

About her head I writhing hung,
And with rich clusters (hid among
The leaves) her temples I behung,
So that my Lucia seemed to me
Young Bacchus ravished by his tree.

My curls about her neck did crawl,
And arms and hands they did enthrall,
So that she could not freely stir
(All parts there made one prisoner).

But when I crept with leaves to hide
Those parts which maids keep unespied,
Such fleeting pleasures there I took
That with the fancy I awoke; 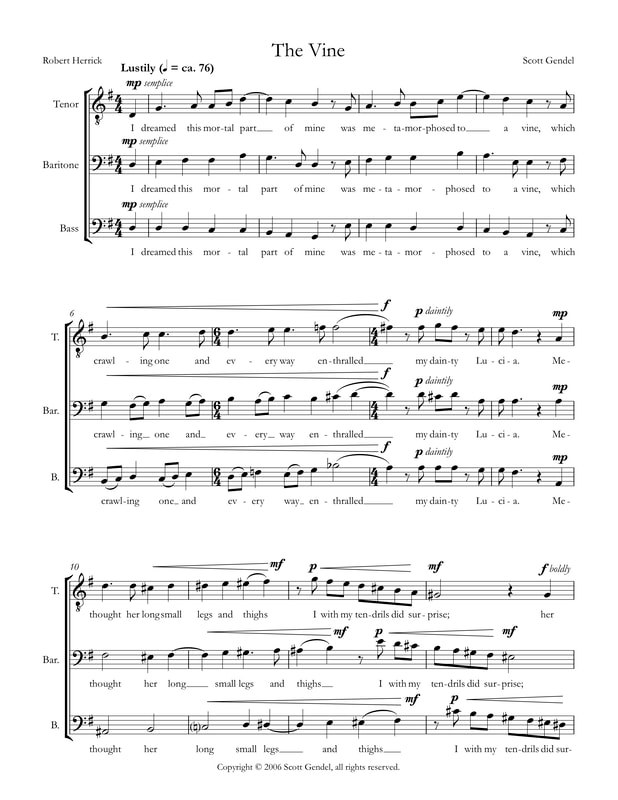